This is an open access article licensed under the terms of Creative Commons Attribution 4.0 International License (https://creativecommons.org/licenses/by/4.0/), which permits unrestricted use, distribution, and reproduction in any medium, as long as the original author is credited and the new creations are licensed under the identical terms.

Detection of structural variations or copy number variants (CNVs) is a critical component of diagnosing many genetic disorders especially when the causative mutation(s) cannot be identified in dominant, recessive and X-linked disorders by Sanger or next generation sequencing. Fluorescence in situ hybridization, whole genome copy number microarrays, next generation sequencing, Sanger sequencing, multiplex ligation-dependent probe amplification, and quantitative real-time polymerase chain reaction (PCR) may miss potential pathogenic structural variations that range in size larger than 500 bp or includes at least one exon. Moreover, CNV calls extracted from whole exome sequencing remain a challenge for clinical genetic testing laboratories due to high false positive rates. To overcome these technical challenges, we designed a custom high-resolution targeted exon-centric microarray (ECM) that has 1508 disease-causing genes including complementary genes to our laboratory’s immunodeficiency focused next-generation sequencing (NGS) panels. The combination of targeting rare immunodeficiency genes with large case load of clinical NGS testing for rare immunological and related disorders allowed for the opportunity to discover novel CNVs and expand our understanding of disease mechanisms in this group of genetically heterogeneous disorders. We have been routinely performing the ECM as a clinical assay and herein report a number of novel CNVs detected in this group of disorders for which intragenic deletions are not a commonly reported etiology. We followed the diagnostic algorithm illustrated in [Figure 1], to increase the diagnostic yield in patients in this group of disorders, but albeit is not limited to these disorders and is recommended for Mendelian disorders because the mutation spectrum of many genes remain understudied and deletions and duplications may represent a significant percentage of pathogenic changes. 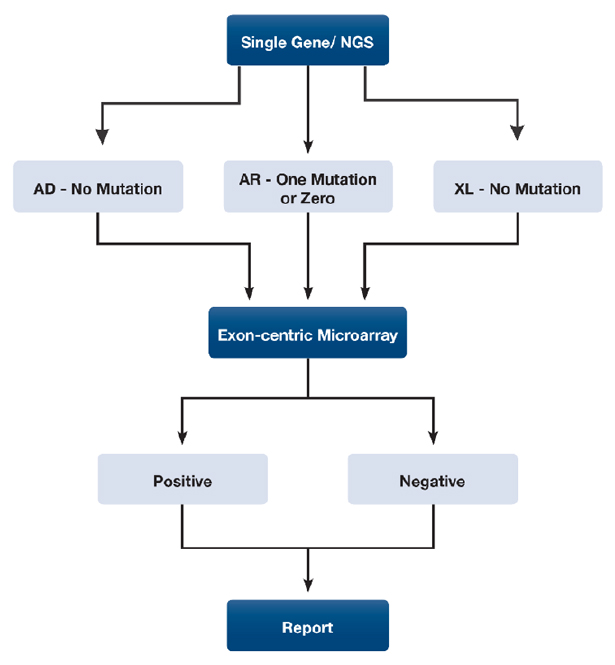 Clinical array comparative genomic hybridization was performed on 1048 patient samples referred to the Molecular Genetics Laboratory at Cincinnati Children’s Hospital Medical Center (CCHMC). ECM analysis was performed on only the gene(s) of interest. Reference DNA was obtained from Promega (Madison, WI). This study was approved by the Institutional Review Board at CCHMC.

DNA was extracted from whole blood collected in EDTA (purple-top) collection tubes using the Puregene DNA extraction kit (Qiagen, Valencia, CA) or the Chemagic magnetic separation module I (PerkinElmer, Baesweiler, Germany) according to the manufacturer’s recommendations. Comparative genomic hybridization was performed following the manufacturer’s protocol (Agilent Technologies, Santa Clara, CA). The reference DNA was used from two pools (male and female) from normal individuals, run as a same-sex control. DNA was sonicated using a Branson Sonifier 450 with cup horn (Danbury, CT) and visualized on a two-percent agarose gel prior to labeling, as a quality control measure. Each patient and reference DNA was labeled with Cy3 and Cy5 9-mer primers, respectively. Purification of labeled products, hybridization, and post-wash of the array was carried out according to Agilent’s recommendation and with their proprietary solutions. Microarray slides were scanned with Innopsys Innoscan 710 and raw data was generated with extraction software (Chicago, Illinois).

CytoSure Interpret software version 4.4 (OGT) was used for analysis of microarray data (referred to as CytoSure). The program uses the circular binary segmentation algorithm to generate segments along the chromosomes that have similar copy number relative to reference chromosome. Averaging of the segments is with median value of all segments on a chromosome as the baseline. Deletion or duplication CNV calls were made using the log2 ratio of each segment with a minimum of 4 unique and consequent probes. The threshold factor for deletions was set as a log2 ratio of -0.6 that is less stringent than the theoretical log2 score of -1 for heterozygous deletions [heterozygous deletion log2(1/2) = -1; no change in allele number log2(2/2) = 0; heterozygous duplication log2(3/2) = 0.59; hemizygous deletion log2(0/1)= -1; homozygous deletion log2(0/2)= -2]. The software uses the standard deviation of the log2 ratio to calculate a deviation log ratio (DLR), which is used as a quality control check. A DLR of 0.08-0.19 is acceptable, 0.20-0.29 is borderline, and ≥ 0.30 is rejected. The DLR for all microarrays shown was scored by this scale. Data was analyzed only for the gene(s) ordered for testing.

We used the high-resolution ECM to process 1048 of samples that were reflex testing from negative or equivocal targeted NGS panel testing or ordered for single gene assessment. We identified 23 CNVs in rare immunodeficiency and related genes [Table 1]. Of the 23 CNVs detected, 21 deletions were identified. Significantly, of these 23 CNVs, 11 (48%) of them were novel, for which intragenic deletions and duplications are not a commonly reported etiology, either due to the low mutation burden of these events or the lack of recognition by an appropriate testing methodology. Six of the 23 CNVs in immunodeficiency and related genes were identified in dominantly inherited genes (26%), 7 hemizygous CNVs were identified in male patients in X-linked recessive genes (30%), 5 CNVs were identified as the second allele in 3 autosomal recessive genes (17%), and surprisingly, 3 homozygous deletions were identified (13%).

List of patients with CNVs identified by exon-centric microarray testing

Meaningfully, we identified 3 novel CNVs in the FAS gene. Heterozygous mutations in the FAS gene cause autoimmune lymphoproliferative syndrome (ALPS), an autosomal dominant disorder, where only three CNVs have been previously described[1-4]. In patient 1, we identified a 6.9 Kb heterozygous deletion that encompassed exons 6-9 and included the intracellular domain and the death domain of the FAS protein. Single gene CNV assessment of FAS was ordered for this patient after negative sequencing of FAS, FASLG, and CASP10 genes. This patient’s phenotype included splenomegaly, thrombocytopenia, history or acute cerebellitis and failure to thrive. Flow cytometry studies from an external laboratory identified an increased population of CD4/CD8 double negative T cells and reduced FAS protein expression. Similarly, in patient 2 and 3, we identified a 1.03 Mb whole gene heterozygous deletion and a 224 bp homozygous deletion in exon 9, respectively. ECM testing was ordered as reflex testing from Sanger sequencing in all 3 patients. The identification of the FAS gene deletions in these patients confirmed a diagnosis of ALPS. In addition, the CNV mutation spectrum of FAS was doubled, showing that ECM is a powerful tool for CNV discovery in rare Mendelian disorders.

Other rare hematology and immunodeficiency genes for which novel CNVs were identified included TERT, WAS, XIAP, MAGT1, RAD51C, LRBA, STXBP2, and RAB27A. Deletions in X-linked genes showed high clinical utility in males due to their hemizygous status. In several cases, a lack of amplification by PCR suggested a deletion, but results were inconclusive in clinical interpretation due to lack of direct evidence and insufficient controls. WAS-related disorders are X-linked recessive and include Wiskott-Aldrich syndrome, X-linked thrombocytopenia, and X-linked congenital neutropenia. Sequencing of the WAS gene identifies up to 95% of pathogenic variants and the remaining 5% of variants are detectable by deletion/duplication testing and 15 gross deletions have been reported. We identified 3 CNVs in 3 male patients involving the WAS gene. In patient 7, we identified a previously unreported 9.49 Kb intragenic deletion of exon 1, and in patients 8, 9 and 10, we identified previously reported whole gene deletions in WAS of size 80.62 Kb, 17.86 Kb, and 18.35 Kb, respectively. Autosomal dominant mutations in TERT cause dyskeratosis congenital, a rare multisystem disorder caused by defective telomere maintenance. We identified a novel 59.46 Kb heterozygous deletion of exons 3-16 and included the reverse transcriptase domain of the TERT protein, the catalytic component of the enzyme. To date, only one CNV in TERT had been identified in a family with adult-onset pulmonary fibrosis[4]. In addition, the LRBA protein is involved in regulating recycling of the cytotoxic T lymphocytes-associated protein 4, which helps regulate autoimmune responses. Biallelic deleterious mutations in LRBA have been associated with common variable immunodeficiency type 8 and to date, only 6 mutations have been identified in LRBA. The biological role of LRBA is currently being elucidated and recent publications have suggested targeted therapies for patients with LRBA deficiency[5]. We identified a novel 729 bp homozygous deletion of exon 57 of LRBA in a patient from consanguineous parents.

In our cohort, we recognized a high diagnostic yield for the ECM assays for immunodeficiencies and related conditions. However, functional studies will be necessary to confirm the causative relationship to disease. This report emphasizes the importance of appropriate ECM testing for immunodeficiency disorders and helps further define gene mutation spectra and our understanding of disease mechanisms in this understudied group of genetically heterogeneous disorders.

Conceptualized and initiated the study, collected, analyzed, and interpreted the data, wrote and reviewed the manuscript: C.A. Valencia

Developed the test and reviewed the manuscript: A. Mathur, J. Denton

Performed the experiments, collected, analyzed and interpreted the data and reviewed the manuscript: B. Jones, E. Liston, D. Hilton

Approved the final manuscript as submitted and agree to be accountable for all aspects of the work: all authors

The study was supported by the clinical molecular genetics laboratory at CCHMC.

The authors declare that they have no relevant conflicts of interest.

This study was approved by the Institutional Review Board at Cincinnati Children’s Hospital Medical Center. 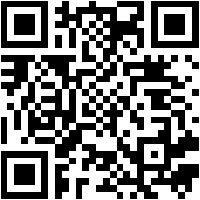