Neurofibromatosis type 1 (NF1) is a complex autosomal dominant neurocutaneous disorder with a variable phenotype involving multiple body systems. It is due to a mutation in the NF1 gene, which results in the production of abnormal neurofibromin protein. According to the National Institutes of Health diagnostic criteria, hyperpigmented skin markings or café-au-lait macules (CALMs), axillary freckling, Lisch nodules, and neurofibromas are characteristic NF1 features. A milder phenotype, apparently manifesting with only pigmentary skin changes, has recently been associated with the c.2970_2972 in-frame deletion. Although neurological findings, including epilepsy and neurocognitive deficits, have been frequently described as a part of the classic NF1 form, they have not been properly characterized in this milder variant. We report for the first time the case of a patient harboring the c.2970_2972del of the NF1 gene and presenting with CALMs, idiopathic generalized epilepsy, and transient brain MRI alterations (so-called “unidentified bright objects”).

According to the National Institutes of Health (NIH) diagnostic criteria[4], NF1 clinical diagnosis is based on the presence of at least two typical features or only one symptom with an affected first-degree relative. Characteristic NF1 findings are hyperpigmented skin markings or café-au-lait macules (CALMs), which typically develop in the first 2 years of life, axillary or inguinal freckling, distinctive bone anomalies, Lisch nodules, and neurofibromas. Neurologic features, in particular mild neurocognitive deficits and epilepsy, have been also frequently described in NF1[5,6]. A remarkable phenotype lacking both cutaneous neurofibromas and visible plexiform neurofibromas has been associated with the in-frame c.2970_2972del[7-9] and the missense mutation at codon Arg 1809[10] mutations.

We report the case of a 27-year-old, right-handed man, who first presented typical absence seizures at the age of 4. At that time, the electroencephalogram (EEG) showed 3-Hz generalized spike-and-wave discharges. At 16 years, he was hospitalized following the occurrence of a generalized tonic-clonic seizure. During his hospital stay, the EEG confirmed the previous findings and a brain magnetic resonance imaging (MRI) showed focal bilateral subcortical signal alterations in the T2-weighted sequences [Figure 1A], which had completely disappeared by the time the patient undertook a follow-up MRI scan 4 months later [Figure 1B]. In addition, during hospitalization the physicians also observed pigmentary manifestations similar to CALMs - eight café-au-lait macules of 10-20 mm located on the arms and the trunk - although no other feature suggestive of NF1 was detected. 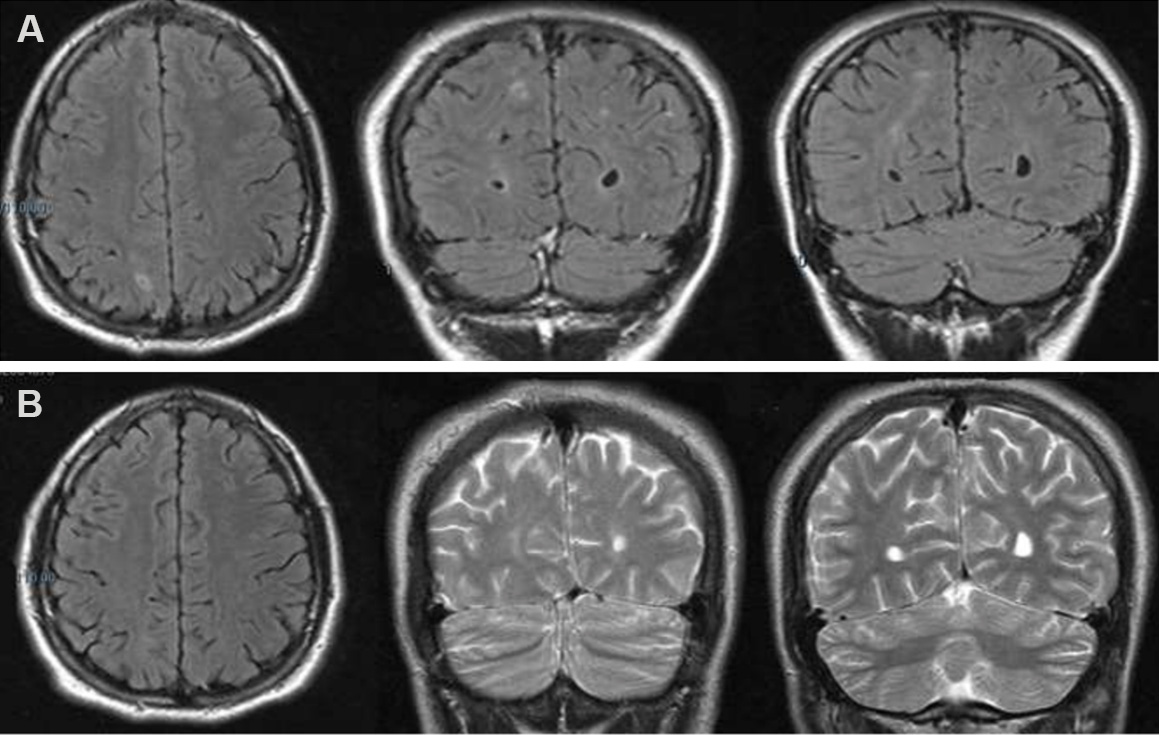 At the age of 26, the patient came to our observation for seizure persistence. He underwent a video-EEG recording that showed the presence of generalized epileptiform abnormalities [Figure 2]. Brain MRI and neurologic examination were normal. A complete neuropsychological evaluation (including Phonemic/Semantic Alternate Fluency Test, Attentive Matrix, Trail Making Test, Rey Auditory Verbal Learning Test, Rey-Osterrieth Complex Figure Test, Short-Story Recall Test, Stroop Test, Raven Colored Progressive Matrices, Abstract Verbal Judgment, WAIS-IV Working Memory Scale, Tower of London Test, and Ideomotor Apraxia Test) documented a normal cognitive profile except for a slight attention shifting deficit. Seizure control was achieved thanks to a polytherapy with valproate 1500 mg/day, zonisamide and brivaracetam 150 mg/day. A dedicated team of specialists (i.e., orthopedists, ophthalmologists, and dermatologists) examined our patient, and were unable to identify other typical features of NF1. This included slit-lamp exam for Lisch nodules and plain film radiographs to screen for bone dysplasias. Although all the clinical and instrumental evaluations did not reveal other peculiar aspects, we performed Next Generation Sequencing (NGS) and Sanger sequencing that allowed us to detect the de novo NM_000267.3: c.2970_2972delAAT p.(Met992del) in exon 22 of NF1 gene. Sanger sequencing did not detect the deletion in parents. 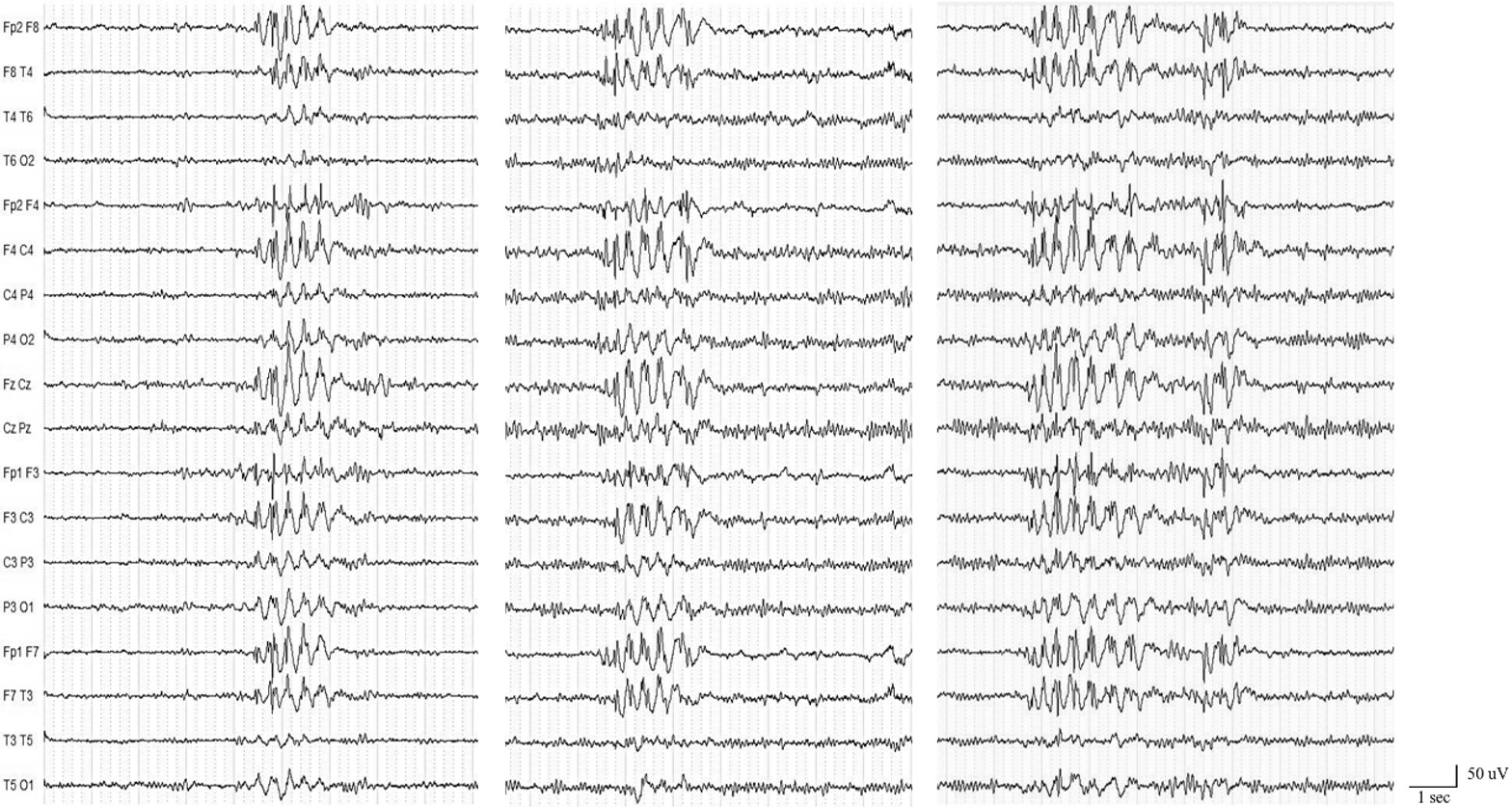 Figure 2. Video-electroencephalogram (EEG) recording showing interictal bilateral synchronous spike- and polyspike-waves discharges. A Micromed, System Plus, 21-channel device was used. EEG electrodes were placed on the scalp according to the 10-20 International System, and all tracings were interpreted using a bipolar longitudinal montage.

Our case presents a peculiar mild phenotype related to a 3-bp in-frame deletion of the NF1 gene (c.2970_2972del) with CALMs as the sole extra-neurological sign, in line with some of previous reports[7-9,11]. In our patient, epilepsy was the main neurological manifestation while the cognitive profile was normal, contrarily to the only other case described in the literature. In that case, the c.2970_2972del was reported in a patient with psychomotor delay, learning difficulties, dyslexia, and drug-resistant epilepsy with different seizure types, suggesting a possible epileptic encephalopathy[8]. Epilepsy is commonly associated with the classic NF1 form, in which the risk of developing seizures is higher than the general population, with a prevalence of 4%-7%[6]. Seizures may be the first symptom in NF1 patients, and, in most cases, they have a focal onset. The underlying etiology may often lie in intracranial NF1-related tumors or other brain structural abnormalities, including hippocampal sclerosis and polymicrogyria[6,12,13]. Our case is peculiar first because epilepsy is occasionally described in the NF1 milder variant. Moreover, the electro-clinical features strongly support the diagnosis of IGE. This type of epilepsy was described only in few cases of classic NF1, but it has never been reported in its milder form. Because presence/absence of epilepsy and “unidentified bright objects” (UBOs) was not addressed in three of the four phenotype-genotype reports of “milder” NF1[7,9,10], it cannot be assumed that these features were absent in the subjects. Although pathophysiological mechanisms have not been clarified, it is widely acknowledged that neurofibromin is abundantly expressed in cerebral cortex during embryogenesis; therefore, a variant in NF1 gene could result in an aberrant neural network, determining an epileptic activity.

Another interesting finding observed in our case was the detection of the so-called UBOs, transient T2 hyperintensities revealed by brain MRI at disease onset. According to published data, these structural alterations, observed in up to 93% of NF1 children[14], could remain stable or disappear over several years, rarely evolving into brain gliomas[12,15,16]. The potential role of UBOs in precipitating seizures and causing epilepsy is rather controversial[12], but they are usually not considered as a risk factor for epilepsy since they almost exclusively involve white matter and basal ganglia and rarely extend to the cortex. Although it is not possible to definitely rule out a contribution of UBO in facilitating or promoting epileptogenesis and ictogenesis, our patient’s typical IGE electro-clinical presentation makes the causal relationship between UBO and epilepsy quite unlikely.

In conclusion, this case represents a further contribution to better define the neurological findings in patients with 3-bp in-frame deletion of the NF1 gene (c.2970_2972del). It appears peculiar for several reasons: (1) the neurologic phenotype included epilepsy without other neuropsychiatric deficits; and (2) the electro-clinical features were strongly suggestive of IGE (firstly described here).

Finally, our case demonstrated that the co-occurrence of epilepsy and cutaneous alterations (mainly CALMs) should prompt physicians to consider NF1 also in cases with subtle clinical manifestations. A causal relationship between IGE and NF1 c.2970_2972del cannot be ruled out, but it is also possible that the patient has IGE susceptibility variant(s) at other gene(s)[17] that could be contributing.

Manuscript draft and revision: Morano A

Clinical data and reports supporting the results reported in this article can be found in the patient’s medical records.

All authors declared that there are no conflicts of interest.

A written informed consent for publication was obtained. 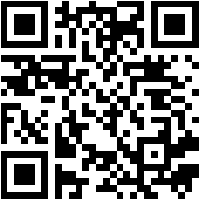